Posted by Steve Smith on October 9, 2012 in Uncategorized

Behind my parents’ house in Southern Maine sprawls a large stand of blackberry bushes. You can go there in August and fill a pail with blackberries the size of your thumb. 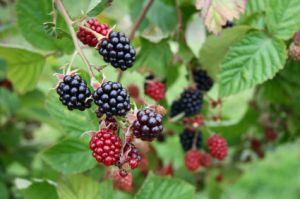 like broken arms among today’s giraffes of greener growth. I used to spend many a summer evening cutting paths between those briars. Thorns tugged at my sleeves or swiped like cat claws across my back. The tang of crushed berries mingled with the scents of earth and mown grass. Intoxicating.

But this bucolic scene masks a graveyard. In the morning—when the sun lies low in the east—dew sparkles on the leaves and you can see spider webs hung like fishing nets between the brambles. Large black garden spiders stalk the edges of these flattened chandeliers. Each pretty web holds its midnight catch of silk-wrapped flies.

Every cult has its deadly web. Deceptive threads that stick and make it hard to leave.

Cult leaders often insinuate themselves into an environment where people seem young and naïve, or are looking for cosmic significance and assurance of relationship with God.

Perhaps the leader uses seminary credentials to woo and to wow the people. They incarnate the assurance and power of God into their own person. They learn to speak with unquestioned, unhesitating authority. The clarion call of their doctrine and the charisma of their presence seem to create a cocoon from the chaos of the world.

A cult leader believes that he or she is right—believes it with a sincere arrogance that begs no question. He convinces his followers that God has anointed him with a special spirit of wisdom so rare that

he alone has unfettered access to the truth. She weaves a web of doctrinal deception stronger than steel. Then she casts it wide and lets it fall to one side or the other of the truth—a little to the left or a little to the right—since the truth of God’s Word is her counterfeit’s best bait.

Sincere people hit these tangled teachings: they hit, stick, and struggle. The cult leader soothes them with layers of silk; wraps their souls in gauze so strong they cannot break free. The leader lets them see the light of God’s Word and makes them forget about the web. People tangle together until young and old, families and singles, are all caught in the same interpretive framework of deception. Some will immediately cease to kick. Others may require more biblical threads to soothe their troubled minds.

For the few who keep struggling, the cult leader injects a little venom.

He mixes silk with poison and lets his followers feel his teeth. Perhaps the cult leader calls questioning followers rebellious or heretical. He might preach early and often on spiritual authority—according to his own distorted conception of it.

One struggling soul can send tremors through the whole web. For this reason, cult leaders despise dissenters. If “rebels” will not be silent, the leader cuts them loose from the web. That way, the troublemaker will no longer infect others with their resistance.

After the cult leader has quelled dissent, he or she will remain unchallenged—a gorged spider surrounded by mummified souls.

She will suck the life out of them at her leisure—they will feed her ego for years.

Do you feel caught in a web of lies? Is your life berries by day and spider-silk by night? Ask God to shine his light on your beliefs–to expose any lies or distorted thinking–and to help you break free from the lies that bind.

← “Crock-Pot” Trauma: Spiritual Abuse and Recovery
A Sensitive Topic: Personality Disorders in the Church (Part 1 of 5) →

3 comments on “Lies that Bind”