One Who Got Away: Libby Phelps Alvarez, Religious Brainwashing, and the Westboro Baptist Church

Posted by Steve Smith on February 6, 2013 in Uncategorized

understood cult. Founded by Pastor Fred Phelps, the rural church believes that the deaths of soldiers and Marines evidences God’s righteous judgment on a land which tolerates homosexuality. Such venom seems to beggar description.

But some people do understand the shadowy cult with its cheerfully-pronounced invective: The few members who have left.

In a tearful interview with NBC’s Andrea Canning, Alvarez recounts how the church eventually started to pray for people to die. Born into the church, Alvarez began picketing military funerals with fellow church members when she was 8 years old. For 25 years she remained trapped in the cult, a victim of religious brainwashing which taught her that she “wasn’t brainwashed.” Alvarez quietly left the cult after the church picketed the funeral of a soldier. The soldier was the husband of one of Alvarez’s best friends. 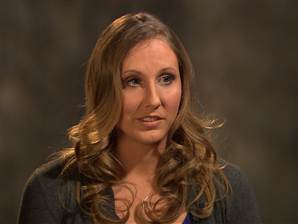 Alvarez gathered her belongings and left the church without a word to her family members. Since then, she worries about the hurt she has caused her family, but one relative told her that no one thinks about her or misses her. Alvarez rejoices in her new-found freedom even as she regrets the hurt she caused others–both to those inside the church and those outside.

How could someone as pleasant, soft-spoken, and sensitive as Alvarez be involved in a church which promotes such hatred? The only explanation is that she was born into a totalitarian religious environment which practiced brainwashing in order to keep members from leaving.

The eight steps of religious brainwashing, as outlined by Dr. Robert Jay Lifton–adapted by Stephen Martin–and summarized in previous posts on this blog, help explain how a sweet-natured girl like Alvarez could spew religious hatred and damnation. They are as follow:

We can rejoice that Libby Phelps Alvarez escaped from Westboro Baptist Church. As a former member of a Bible cult church myself, I have great compassion for her. I can remember my own deception and shake my head sadly. But we also must be vigilant to understand how someone as sweet as Alvarez could remain in such a hateful church.

Does God laugh when soldiers die? Of course not.

But he also doesn’t write off members of the Westboro Baptist Church as hopeless–instead, he delivers some of them from their brainwashed state and redeems their lives.

Help prevent spiritual abuse in your church by understanding the eight steps of religious brainwashing.

2 comments on “One Who Got Away: Libby Phelps Alvarez, Religious Brainwashing, and the Westboro Baptist Church”