Posted by Steve Smith on June 22, 2012 in Uncategorized

“The most portentous fact about any man is not what he at a given time may say or do, but what he in his deep heart conceives God to be like. We tend by a secret law of the soul to move toward our mental image of God.”  – A.W. Tozer

Have you ever taken a mug shot of God?

But it didn’t turn out to be him.

In November 2008 I realized that I avoided God because I feared him. It was my first semester at Dallas Seminary. I sat on my brown falling-apart couch in my small apartment and trembled. I wanted to turn to God in prayer, but he seemed scary, distant, wrathful. The sort of God you’d need to approach with asbestos gloves. The sort of God you should lock behind bars. A criminal.

This seemed strange to me, since when I stared directly at the Bible’s descriptions of God, his attributes seemed clear. I knew he was loving, gracious, and kind. I believed he was holy, but also full of compassion and mercy. On paper at least, my theology seemed sound.

Why then, in the daily grind of life, did my heart turn away from him? 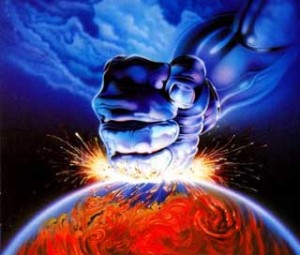 On paper I loved God. But in my heart I feared him with a cringing, unhealthy terror.

into me since childhood. Programmed through the modeling of broken authority figures, the twisting of scripture, and the confusion of seeing God’s name used by my legalistic pastor to instill fear and consolidate his own control. Since actions speak louder than words, I spent 95% of my time absorbing lies about God (as I saw how my pastor related to me), and 5% of my time trying to wring them out (as I read scripture). It was no surprise that I found myself sopping wet with misperceptions about God.

Since so many of those mischaracterizations lived in the shadows of my mind, I decided to compile four false portraits and turn them into criminal profiles of other “gods.” That way, I could reject them when I saw them.

When I first lived in the singles dorm at the seminary, students staffed the courtesy desk in the lower lobby and served as dispatchers for campus police.

One late November night, Jay*–the student at the courtesy desk–observed through a security camera a man urinating against the dumpster in front of the building. It was 11pm, dark, and the camera gave only a grainy picture of the scene. Jay radioed campus police who came and apprehended one of several scruffy men parked in a nearby car.

The officer brought the man to the front desk. I heard him gruffly ask, “Is this him?”

“I can’t be sure,” Jay said. “It was really dark. I saw it on the security camera. I couldn’t pick out any features. There was a glare on the screen.”

The police officer sounded nonplussed. “Are you sure you can’t tell?” He then turned to the suspect and said, “Were you pissin’ on the dumpster?”

The officer let him go. Then the policeman turned to Jay. “Son,” he said, “it would be more helpful if when you call me over here you could give a clear description of the perpetrator so we can get a positive ID and I can give him a citation for criminal trespassing or indecent exposure. That way, we can say, ‘Get off our property and don’t ever come back!’”

In November 2008, as I drew these four criminal profiles of God, I wanted to sketch them so accurately that when they appeared in my mind I could say, “Get off my property and don’t ever come back!”

God seems cold, distant, and austere. He is a father, sure, but a father in name only, as if it were just an official title. He seems more like a mafia don. He is a God I must fear and avoid. He always seems angry, always displeased, always severe. He

loves to punish people and takes delight in causing pain. He does not care about my hurts, my desires, and my relationships.

I believe that he takes pleasure in my pain, loves to crush my dreams, and wants to harm my friends. He expects me to go into the family business, but I want nothing to do with it. I am most content when he is most distant. I do not trust him since the words he says in public are inconsistent with his private actions. With him, it is always “damned if you do, damned if you don’t.”

God obsesses over hard work. If he catches me resting, he beats me. If I don’t produce enough, he yells at me. God is more concerned about the product than the worker, and he gleefully sacrifices people to satisfy his expectations. My best effort is never adequate, and when I think that I have improved, he cuts me down in front of other people. He skulks around waiting to catch me in some error. When I 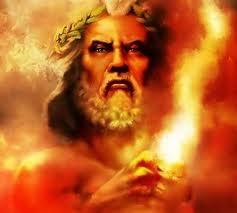 To me, God seemed impossible to please. Always sober, serious, and severe.

make a mistake, he magnifies it and tells me I am worthless.

God applies tremendous pressure to each person and makes them believe that everything depends on them. He is a perfectionist and impossible to satisfy. I resent this and feel defeated when I try to please God. He may love other people, I think, but he certainly doesn’t love me. How could he, when his unrealistic expectations crush me into the dust?

God is a total fake. Everything he says in his Word is a double-standard which he himself does not follow. While he tells me to love my neighbor as myself, he kills

If your perception of God is of a raging tyrant ready to pour out fire and brimstone at the least provocation, you have missed important parts of God’s character such as mercy, love, and grace (cf. Ex. 34:6-7; 1 Jn 4:7-21)

my neighbors and sends them to hell. He demands that Christians sacrifice everything to follow him, yet he sits in unimaginable splendor in heaven. He expresses concern in his Word for perishing souls, yet he appears unwilling to lift a hand to intervene as they pass into destruction.

While he claims to be both sovereign and loving, he is unwilling to ordain the salvation of all people. He alone is able to produce repentance in people’s hearts, yet he holds people accountable when they fail to repent. He promises his Holy Spirit to assist them, yet he allows Satan to counterfeit the Spirit. God is all talk and no action, and he seems to take pleasure in double-speak and confusion.

God has an almost paranoid fear that one of his children might somehow, someday be happy. He works very hard to prevent this, and takes great pains to prune joy, peace, and happiness as soon as they start to bud in one of his servants. God feels happiest when his people seem most miserable, and he takes a sadistic pleasure in

destroying their plans and breaking their relationships. God gives men a sense of beauty, but they find beauty so rare in creation that it serves more to taunt them than to bless them.

God produces ardent desires in young people, then systematically destroys those desires and calls it “taking up their cross.” If I cherish a notion as to how I might best serve God, he will blast those plans and make me do what I most hate. God calls me to spend my time in quiet penance, personal misery, interpersonal conflict, inner agitation, and spiritual depression. He seems unwilling to lend a hand to help me, and seems most pleased when I feel most sorrowful.

These four criminal profiles are all blasphemous images of God. I now reject them in their entirety. I can see that how I viewed God was filtered through the personality and teaching of my former pastor who believed that he served as a mediator between God and men. Though we talked about grace and mercy in my church, in reality we lived as though we had to earn our own salvation. Though we studied God as a God of love, in my own experience he seemed a hateful and smug perfectionist.

Have you ever taken a mug shot of God?

You have?  Then it’s not really him.

Tell that “god” to get off your property and never come back.

* Not his real name.

[The most accurate portrait of God I have ever read is A.W. Tozer’s Knowledge of the Holy. If you struggle with misperceptions about God, I encourage you to read this excellent short book.]

2 comments on “Criminal Profiles of God”