Posted by Steve Smith on October 4, 2012 in Uncategorized

Snow melted from my boots and formed a spreading stain on the carpet.

Outside, a foot of fresh powder lay untroubled by tracks. The University had cancelled classes for the day but I had several time-sensitive matters to attend to. So I drove in on slush-greased roads to my basement office in southern Maine. A few necessary emails, a handful of critical documents, and I would be gone.

I booted up my computer and looked at my inbox. Oh yes. A local 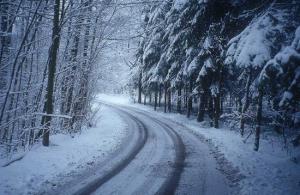 restaurant owner was supposed to stop by to pick up a deposit check for an upcoming event. But since the University was closed, I knew the check wouldn’t be ready. I emailed the man to stop by later in the week. Then I proceeded to triage the stack of papers in front of me.

An hour passed. One more email and I’ll get out of here, I thought happily.

From my periphery vision I saw legs pass in front of the basement window—a sudden flash of dark then light—and I heard the outside door open. Only one person would be here on a snow-day: the restaurant owner looking for his check.

Panic struck. I felt unprepared and deathly afraid. If the man discovered the check wasn’t ready, he would punish me. Punish me!

Without thinking, I leaped from my desk and hid behind a Chinese screen in the office. In a split second I had gone from a 27-year-old working professional to a frightened child.

There came a knock at the locked door and a man’s rough voice: “Anyone here?”

My heart thumped so loudly that I was sure the man could hear me from the other side of the door. Despite the cold day, rivulets of sweat coursed down my back.

Another knock, louder than the first: “Anybody here? I thought I saw a light.”

I wanted to scream. I burrowed behind a stack of ancient files, their labels clearly visible in faded purple. If I could have, I would have sunk into the floor. Instead, my thighs doubled under me as I crouched smaller and smaller. My haunches pressed against my wet boots.

Why was I hiding?

All I knew was that if this man found me, bad things would happen.

This post is not intended to be clinically authoritative. There are books and manuals for that.

Instead, it is permission and empowerment.

Permission to name the hurt that has happened to you.

And empowerment to start the healing process.

One aspect of spiritual abuse that sometimes gets overlooked is the trauma of it. Most folks associate trauma with a catastrophic event.

Let’s be crystal clear: Not all trauma is the result of a sudden 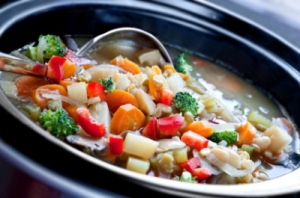 catastrophic incident such as rape, kidnapping, or combat. While these events certainly cause trauma, there is also another cause.

I call it “crock-pot” trauma.

Crock-pot trauma is trauma which occurs slowly and systematically, just like a crock-pot slowly cooks meat and vegetables. This type of trauma may take months or years to produce, and it involves eight ingredients which produce a recipe for trauma:

This type of trauma is similar to that described by POWs from World War II and Vietnam. It is trauma that results from being powerless and abused day after day, year after year, whether physically, emotionally, or spiritually. While spiritual abuse victims may or may not suffer physical abuse, their souls are torn and bleeding. It is the proverbial “death by a thousand cuts.” 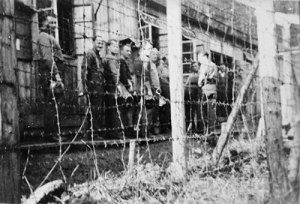 damage done to the psyche of the followers involved. There is attrition of spiritual health that results in emaciated souls every bit as sick as POWs. And there are the verbal and spiritual beatings that Dale Wolery from the Clergy Recovery Network calls “metaphysical stoning.”

It is trauma caused by the Word of God used like the thrust of a spear, the constant threat of God’s displeasure and eternal damnation, and the death of dreams and relationships. This is real trauma: the trauma of the soul.

While not every spiritual abuse victim suffers these symptoms, some do. I have experienced all of these symptoms during the past five years—and I know folks from my former church and other cult-like groups who have experienced similar symptoms. Indeed, the church consulting agency that helped our church disband recommended that the church be shut down entirely. They did this because almost every member of the congregation was traumatized when they entered the church building. In a manner of speaking, we were all spiritual POWs now set free. Yet many of us still carry psychological chains.

Sometimes it takes very little to rattle those chains. Situations which trigger my feelings of panic include: seeing a police car turn on its lights behind me; reading the same translation of the Bible that my

former pastor favored; being late to an event by even one minute; encountering an authority figure; hearing the old hymns that my former church used to play; walking into a congregation of less than 100 people; participating in an event which has a formalized dress code; grocery shopping; and flossing my teeth. Yes, in my former church we even had a theology of flossing. Our pastor equated flossing with spiritual maturity.

Each of these things, though non-threatening at face value, triggers in me memories of spiritual abuse. That’s why when the restaurant owner appeared unexpectedly at my workplace, I had a panic attack: I was unprepared for his visit and felt alone and vulnerable. In my former church, being unprepared was a punishable offense. I have had to give myself permission to call this constellation of symptoms what it is: post traumatic stress.

And I have had to start the empowering process of healing from it.

The healing process begins by exiting the abusive environment where crock-pot trauma occurs. It continues by seeking out safe people who can love and affirm you and listen to your story. It will probably include sessions with a licensed counselor who can help facilitate your healing.

Trauma specialist Linda Marten describes the steps to healing after a loss. I apply these same principles to healing from trauma:

According to Marten, healing takes time and energy. We must be patient with ourselves and others. We must resist trying to measure up to the “oughts” and expectations of others. We must give as much grace to ourselves as we would give to someone else who has experienced a trauma.

And this all takes time.

When I visited Mammoth Cave in Kentucky with some college 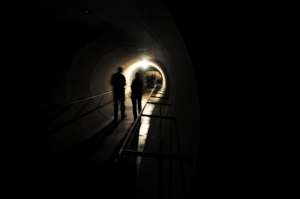 friends, we followed a bearded ranger into the middle of the cavern. When we reached the deepest point, the ranger said, “Six miles in, six miles out.” By this, he meant that there was no shortcut back to the surface.

Trauma is like that. If you have spent years in an environment of “crock-pot” trauma, you can expect that it will take years to regain health.

But in this case, you have the comfort of knowing that you are walking in the right direction.

Let’s walk together toward the light.

Author’s Update, 11/5/12: Post-Cult Trauma Syndrome is a recognized condition. Visit the Cult Help and Information website here to learn more about it.