How to Identify Religious Brainwashing: The Dispensing of Existence (Part 8 of 8)

Posted by Steve Smith on November 13, 2012 in Uncategorized

This is the final in an eight-part series on how to identify brainwashing in a destructive group or cult. It is based off of Dr. Robert Jay Lifton’s “Eight-Point Model of Thought Reform” and borrows from several other authorities on the topic of religious mind-control.*

*Stephen Martin’s book, The Heresy of Mind Control, and Margaret Singer’s Cults in Our Midst.

November oaks lined the road, their feet sunk in last night’s rain and cluttered with leaves. The scent of wood smoke curled beneath a pale sky. It was cold. 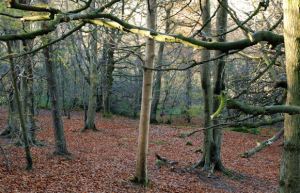 We circled slowly in my pastor’s blue Buick, talking of the past. This was my old neighborhood in North Yarmouth, Maine. Rural. Isolated. A throw-back to the old days when neighbors knew neighbors and children played unafraid on little-used streets.

I smiled to myself, remembering.

We passed a small subdivision. I saw a middle-aged woman in a red coat walking her dog on the gravel shoulder. Ferris* seemed oblivious. He inched past her on the rural road, talking about God and my life.

The woman watched us as we rolled past. She waved.

I felt heat creeping beneath my collar.

Ferris continued to talk about God’s plans for me.

I watched the woman in my side-mirror. We barely outpaced her as Ferris cruised along, then he pulled to the side of the road fifty feet in front of her.

I tried to put myself in the woman’s place, alone with my dog on a bleak road, with two strange men in a car pulled to the side of the road in front of me. Kidnappers? Rapists? My face flushed.

From my peripheral vision I saw the woman approach the car.

She waved through the closed window at Ferris. “Are you gentlemen lost?” she said pleasantly, her voice muffled by the glass. “Do you need directions?”

I smiled at her.

Ferris ignored her and continued to talk.

The woman cocked her head, puzzled.

My skin prickled. I felt confused. Surely Ferris could see and hear her, couldn’t he? But he acted as if the woman wasn’t there, as if she didn’t exist.

Ferris threw the car in gear and began to cruise slowly along the road.

The woman stepped back from the car and I could see her in the rearview mirror, still looking puzzled, getting smaller and smaller until we finally drove out of sight, her kindness unanswered.

Her red coat blinked like a berry against the gray oaks.

I heard Ferris telling me how much God loved me.

*Not his real name

Perhaps the saddest aspect of religious brainwashing is what Dr. Robert Lifton calls “The Dispensing of Existence.” Lifton writes:

“The totalist environment draws a sharp line between those who have a right to exist and those who do not. They claim that those outside their group have no right to exist, or at least say that those outside their group are inferior. The group thus has an arrogant and elitist mentality, considering themselves superior rather than having equal rights as other humans. Those who do not conform to their path of existence are targets of rejection or annihilation.”

This concept can be easily seen in history. Crusaders pillaged and burned their way to the Holy Land, then slaughtered entire Muslim populations. Hitler unforgettably used Nietzsche’s concept of the “Superman” to justify his favoring of the Aryan race and persecution of so-called “inferior” races such as Jews, Gypsies, and Poles.

during the 1990s. Taliban leaders promoted such thinking in the late 1990s in Afghanistan, and al-Qaeda declared jihad against westerners and “impure” Muslims in the 2000s. 9/11 taught us much about the modern realities of existential elitism.

But these are extreme examples. What does “the dispensing of existence” look like in unhealthy religious groups or cults today? Surely Christians in America would never practice such obvious bigotry.

Or perhaps they would.

Here are three steps that cult leaders use to promote “The Dispensing of Existence” today:

First, unhealthy religious groups establish an exclusive orientation. They believe that they alone have the truth of God, that they alone interpret the Bible correctly, and that they alone are privy to the secrets of God. Leaders of such groups cultivate an orientation of secrecy, elitism, and superiority. Often, they claim that all other professing Christians are false, deceived, or are wolves in sheep’s clothing.

“But,” you may ask, “doesn’t the Bible say that Jesus is the only way to heaven? Isn’t Christianity exclusive?” The answer is that, yes, Christianity is exclusive in doctrine—the Bible says that Jesus is the only way to be saved (Acts 4:12). But Christians should not be exclusive in practice. Indeed, both Jesus’ disciples and early Jewish believers struggled with understanding God’s heart of inclusivity within the exclusivity of Jesus’ claims.

For example, in Mark 9:38-41, Jesus’ disciples tried to prevent other people from casting

out demons since those folks were not part of the Twelve. When they told Jesus this, he corrected their perspective: “’Don’t stop him!’ Jesus said. ‘No one who performs miracles in my name will soon be able to speak evil of me. Anyone who is not against us is for us. If anyone gives you even a cup of water because you belong to the Messiah, I assure you, that person will be rewarded.’”

And in Galatians 2, Paul had to confront Peter because Peter had succumbed to hypocrisy by ostracizing Gentile believers and surrounding himself with Jews only. Paul reminded Peter and those with him that the gospel is for all people, not for exclusive ethnicities, religious clubs, or holy rollers. Both Paul and the Prophet Joel remind God’s people that “…the same Lord is Lord of all and richly blesses all who call on him, for, ‘Everyone who calls on the name of the Lord will be saved’” (Romans 10:12, 13; Joel 2:32).

The result of exclusivity is an “Us vs. Them” mentality which unhealthy religious groups develop. Such groups spend most of their time denouncing other denominations or churches rather than focusing on the good news of the gospel. They develop a fighting mentality which bristles often, takes offense easily, and delights in cutting other people down. Such practices stem from a fear of contamination by outsiders, a belief in the

superiority of the particular group’s doctrine, and an unwillingness to engage intelligently and humbly with other beliefs or practices. Groups like this put up walls against “outsiders.” Talking with them feels like talking to a brick wall.

The Bible condemns this. In Ephesians 2:12-19, Paul writes that prior to Christ there were natural divisions between Jews and Gentiles, but that Christ has torn down such walls of division and has made one new person. Christ has torn down the dividing wall, reconciled warring factions, and made peace in himself. He came and preached peace to those who were far away, and peace to those who were near.

Indeed, the Bible confronts religious people who believe that their own religious group or sect has all of the truth. In Galatians 5:20, Paul explains that it is the natural man—the sinful part of us—that promotes factions, dissension, and strife. Yet unhealthy religious groups take pride in their narrow exclusivity and claim God’s favor.

The Corinthian church was probably the most carnal of all of Paul’s church plants. They thought that they were wise, but in reality they were foolish. Paul spent much time correcting their errant beliefs and practices. Not incidentally, the Corinthians in their carnality promoted religious factions, exclusivity, and combative behavior which brought the name of Christ into disrepute—just like unhealthy religious groups today.

To all of this, cults respond with the following, and final, point.

As their own little group.

And while they claim to believe that there are many other Christians around the world—somewhere—and down through history, in practice they act as if they alone have the truth and are the only ones who are saved.

They believe that most professing Christians are in fact deceived and are led by false prophets. They also believe that people who profess the name of Christ but who do not live as their own particular group leader teaches are worse than human: they are sub-human. This allows them to speak horribly about them, reject them, and eventually treat them as non-human.

This is why my pastor could ignore the woman who was talking pleasantly to him and trying to be helpful: in his mind, she wasn’t worth the breath to answer. She was sub-human. A non-being. Ferris just wanted to focus on God and his own acolyte, namely, me.

Unhealthy religious groups brainwash their followers by convincing them that people outside of their group are sub-human. They use passages like Hebrews 6:4-8 to justify this. Hebrews 6 is a warning passage about falling away from the faith. The writer uses strong language to describe people who claim to have faith in Christ but who eventually reject Christ and fall away. The passage is not describing someone losing their salvation; it describes a person who never had genuine faith in the first place. Since it describes such people using a metaphor of “worthless” ground, cult leaders use this passage as justification for treating people outside their group as worthless and sub-human.

Or cult leaders misinterpret Jesus’ words in Matthew 18:6 which describe church discipline. Jesus says that someone who is unrepentant and who will not listen to wise rebukes should be cut off from the church and treated like a “Gentile and tax collector.” Unhealthy religious groups take this to mean that a person should be excommunicated, shunned, ignored, or, in extreme cases, persecuted.

consideration than did other first-century Jews (Matt 9:11; Mk 2:16; Lk 5:30); that Jesus came to save sinners and not the (self) righteous (Matt 9:13; Mk 2:17; Lk 5:32); and that in Jesus’ death on the cross he abolished natural barriers and social boundaries (cf. Eph 2). Jesus’ instruction in Matthew 18:6—and the author of Hebrews’ warning in chapter 6—are warnings and calls to wise boundaries, not a license to ostracize, ignore, or treat other people as sub-human.

“The Dispensing of Existence” is a false idea promoted by deceived religious leaders. Don’t let them brainwash you into believing it.

Christ came to save sinners.

That’s all of us.

Related Post: One Who Got Away: Libby Phelps Alvarez, Religious Brainwashing, and the Westboro Baptist Church

← Who Writes Your Shattered Life?
A Believer’s Assurance in Christ →

12 comments on “How to Identify Religious Brainwashing: The Dispensing of Existence (Part 8 of 8)”