Posted by Steve Smith on March 23, 2014 in Uncategorized

Editor’s note: This is a re-post from Dr. Stephen Crosby’s blog, “Sword of the Kingdom.” This article about the “Can’t Talk” rule explains how authoritarian church leaders misuse the church discipline process in Matthew 18 to stifle dissent. It is an excellent article, used by permission. For my related post on “Church Leaders and the ‘Don’t Talk’ Rule,” click here. 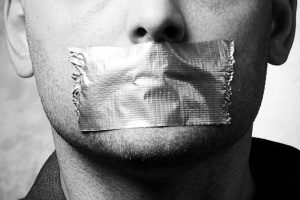 In these environments Mt. 18 is used to silence dissenting speech and troublemakers. The potential merit of a concern or point of view is nullified, and a fair hearing denied, by pointing to the alleged procedural violations (failing to follow Mt. 18) of the one bringing up the issue. The Christ-like response would be to deal with both: the issues of concern and the relational dynamics of the community. Using Mt. 18 as a shield against criticism or complaint (justifiable or not) is as unfortunate as it is common.

Speech is articulated thought. Articulated thought calls to action. Action shapes reality. Therefore, whoever controls speech, controls reality. Would be dictators learn this in Tyranny 101 class. By using Mt. 18 as a speech-control template (through well-meaning ignorance, conflict avoidance, or malice) leaders can manipulate a group of individuals and thus control and shape a community’s experiential reality: a reality that too often accrues to the material, social, or psychological benefit of leadership.

Isolated individuals cannot know that they share mutual concern. By psychological segregation individuals are made to feel like there’s something wrong with them, and them alone. Functional personhood involves open and honest communication. It is neither a disorder nor a sin,[2] but under the “can’t talk” rule, it’s labeled as deviant: not conforming to group norms. Christian authoritarian deviance labeling is creative, e.g.: having an “independent” spirit, deceived, divisive, rebellious, untrustworthy, unsubmissive, Jezebel-spirit, Absalom-spirit, not a “son of the house,” unwilling to “serve in another man’s vision,” and many more.[3]

A common way to shame or suppress a person into silence is to skillfully leverage the expertise of others against an isolated individual: “Do you think you are better or smarter (more “spiritual”) than expert leader so and so? Everyone else is happy. Are you smarter than everyone else too? You are the only ones with a concern. So, we are all wrong and you alone are right? Who do you think you are?”[4]A minority voice is no more constitutionally right than a majority voice. But a minority voice is worthy to be honored with a respectful and fair hearing, not deviance labeling.

These isolation and deviance labeling techniques, underwritten with the misapplication of Mt. 18, are used to cultivate self-doubt, fear, and a lack of trust in the quiet, inner voice of the Spirit warning an individual: “this is not right, something is wrong, say something!”  The voice of Christ within the community is thus silenced and legitimate problems are suppressed and stage-managed.

In these environments, the phrase: “we have a concern,” can never be uttered, only “I have a concern,” because “we have a concern” means, “you’ve been talking,”[5] and is considered a categorical violation of Mt. 18.  It’s a bit difficult to be my brother’s keeper and to care for one another[6] if I am forbidden to speak to my brother about the cares and concerns we share in community, even when these involve other people. Expressing an opinion, concern, or care is not gossip.[7]

Someone called me once and told me that she had discovered (and others had confirmed) that her Sr. pastor had hidden video cameras all throughout the church in plants, and flowers, etc., so he could catch people “talking” and “stamp out the sin of gossip.” When she sought advice from peers and tried to appeal to the Sr. pastor about how inappropriate that was, she was told “if you are not gossiping, why would you care?” She was also rebuked by her leadership for not “following Mt. 18″ with her grievance. They never addressed her issue because she allegedly violated the “Mt. 18 protocol” with her grievance. Also her church had its own protocol. She was supposed to go to her home group leader first, then the zone pastor, then the associate pastor, only then could she confront the Sr. Pastor. This dear saint was actually in soul-conflict over if it was “ok” or not to leave that church. I told her to get out! Yesterday! If you have had Mt. 18 leveraged against you, as a behavior, thought, and speech control mechanism, this blog series, and this booklet is for you.

This blog is an excerpt from our booklet: The Rescue of Matthew 18, available in print and electronic formats at www.stevecrosby.com.

[2] The fallen, Adamic, sin nature and human personality are not the same thing.

[3] A “spirit of independence” or an “Absalom spirit” are characterized by malice, subversion, and a destructive agenda, not by the mere expression of individual personhood in dissent.

[4] Classic psychological abuse and control techniques refined to a high art by the People’s Commissariat for Internal Affairs, or NKVD: the Stalinist secret police.

[5] Identical concern among individuals is only conspiracy to the insecure.

[7] Gossip is malicious conversation about intimate personal details of someone else’s life, character, identity, or calling be they rumor or fact. Moral superiority is attempted through the tearing down of the other, behind the other’s back.   However, discussing systems, things, events, philosophies, ideas, methods, shared-corporate concerns, experiences, exposing corruption, expressing personal pain, looking for help, asking for other’s perspectives, getting confirmation or correction from others within the community, confessing our sins one to another are not gossip.

Copyright 2014,  Dr. Stephen R. Crosby, http://www.swordofthekingdom.com. Permission is granted to copy, forward, or distribute this article for non-commercial use only, as long as this copyright byline, in totality, is maintained in all duplications, copies, and link references.  For reprint permission for any commercial use, in any form of media, please contact stephrcrosby@gmail.com.

← The Lion Makers: Fred Phelps and the Outcome of Cult Leaders
Does the Church of Wells Teach a False Gospel? →