8 Ways to Distinguish Gossip from Criticism

Posted by Steve Smith on May 30, 2014 in Uncategorized

Recent news reports about Christian leaders have raised an interesting debate: what is gossip, and what is legitimate criticism or concern? Does a Christian leader have the right to fire employees over what he or she considers gossip? And what about all the cult leaders or spiritually abusive leaders who define any criticism of their leadership as gossip? If all criticism is gossip, then no Christian leader can ever be called to account.

As with any other word, gossip has both a dictionary and a biblical definition. It cannot mean whatever we want it to mean. When a church leader redefines healthy criticism as “gossip” and punishes followers who ask questions or raise concerns, that leader has created a parallel universe in which he or she is unimpeachable. Such an environment is toxic and the leader has used a false definition of a biblical term to bully and shame their followers into silence. 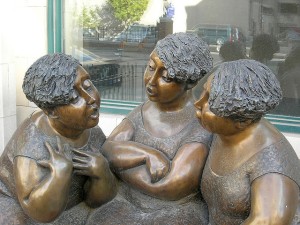 So what is the definition of gossip?

Merriam Webster defines gossip as “information about the behavior and personal lives of other people.”

That’s pretty broad and thus unhelpful. Can you see that anything you say about another person could fall under that definition? This is how spiritually abusive leaders define gossip, except, of course, when they are the ones talking about others. Then it becomes “discernment.” Right.

The Oxford Dictionaries define gossip as “Casual or unconstrained conversation or reports about other people, typically involving details that are not confirmed as being true.”

This gets us closer to a useful definition, but it is still pretty broad. And we all realize that sometimes gossip involves details that are true but are inappropriate to share, right?

The third time’s a charm. The Free Dictionary defines gossip as “Rumor or talk of a personal, sensational, or intimate nature; a person who habitually spreads intimate or private rumors or facts; trivial, chatty talk or writing; casual and idle chat; a conversation involving malicious chatter or rumors about other people.”

This is the most helpful definition because it is the most precise. Here we see gossip’s content, motive, and character. I think the Bible largely agrees with this definition.

Michael Houdmann over at Got Questions? says, “The Hebrew word translated ‘gossip’ in the Old Testament is defined as ‘one who reveals secrets, one who goes about as a talebearer or scandal-monger.’ A gossiper is a person who has privileged information about people and proceeds to reveal that information to those who have no business knowing it.”

8 Ways to Tell the Difference between Gossip and Criticism

1.) Motive Toward the Other

Gossip’s motive is destructive and malicious: it wants to bring down another person in order to destroy them or make them look worse than they are.

Criticism wants to make someone or something better; it is based on love which always protects, thus it does not unnecessarily expose another person for the sake of sensationalism, but it also does not cover up for a leader when that leader’s actions are hurting other people.

Gossip’s motive is to build yourself up as superior to the other, and as a source of information which makes you feel powerful and special.

Criticism comes from a humble heart which is unafraid to stand up for what is right, even if it hurts.

Gossip is based on cowardice and falsehood.

Criticism is based on courage and truth.

Gossip often states falsehood as fact. Gossip often twists the truth to make it seem worse than it is.

Criticism fact-checks and refuses to use unsubstantiated information. Criticism understands that people and situations are rarely black and white. It refuses to twist facts to better fit its own agenda.

A gossip (the person who gossips) lacks self-control, is undignified, tends toward idleness, combines gossip with slander, is unconcerned about truth, betrays secrets, promotes rumors as facts, is prone to sensationalism, is jealous, lacks contentment; he or she is quarrelsome, stubborn, and rebellious. In other words, a person who gossips tends to have a constellation of negative qualities which brands him or her as untrustworthy and destructive.

A critic, on the other hand, has a reputable character which is full of the fruit of the Spirit.

Criticism understands the power of media and uses it only when appropriate. The more private the matter, the more private the medium; the more public a matter, the more public the medium. Crucially, a critic understands the difference between a public figure and a public matter. Public figures deserve privacy when a matter does not impact their public ministry. But if the matter does impact their public ministry, it may be shared with all those affected. Such sharing is not gossip, it is proportional. Such is the parity of the platform, where teachers enjoy additional prestige and also additional accountability.

Gossips ignore protocols, whether biblical or other, and widely share private information without following biblical due process.

Critics, on the other hand, confront the offending person (if safe to do so) privately (this could include correspondence, phone calls, etc.), then with another trustworthy person, and then with the church. As noted above, a critic shares negative information about another person only insofar as that particular information impacts other people, in other words, as far as another person’s platform and influence warrants.

Criticism, on the other hand, empowers those who listen to it and either corrects errant leaders by keeping them accountable to biblical standards, or removes them in order to strengthen the organization they previously led and protect the people they were supposed to serve.

When leaders redefine gossip to mean any criticism at all, they evidence unhealthy controlling behavior. When followers redefine criticism in ways which make gossip seem acceptable, they sin.

In a world of Internet virality, Christians should weigh their motives and the content of their claims before criticizing public figures.

Public figures, for their part, should sit quietly when criticism comes and humbly evaluate the claims to see if they are true. Even if the criticism seems to come from an obnoxious source, it should be evaluated. Who knows? It wouldn’t be the first time God restrained a prophet’s madness through the mouth of an ass.

Sometimes critics are the only ones courageous enough to tell us the truth.

7 comments on “8 Ways to Distinguish Gossip from Criticism”